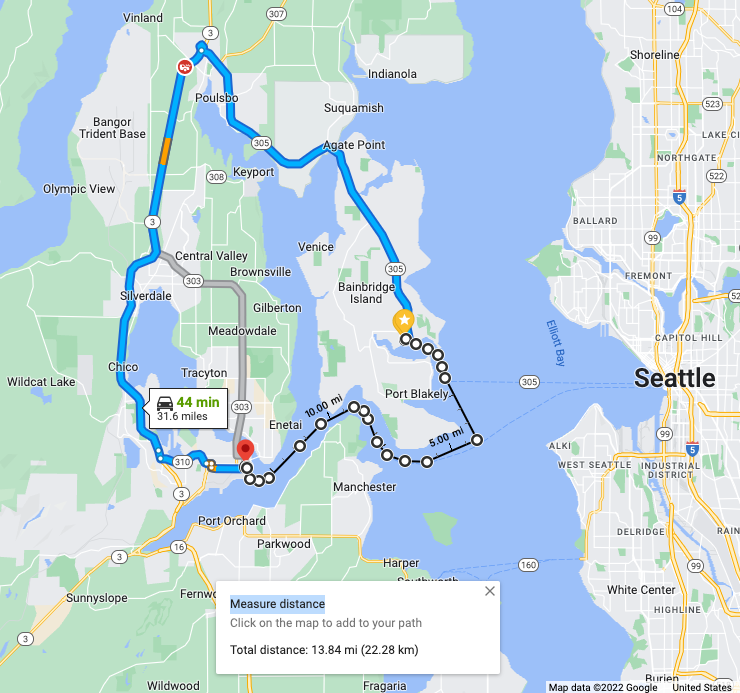 Does Kitsap County need a new passenger-only ferry route connecting the existing docks in downtown Bremerton and Winslow? As reported in the Kitsap Sun this week, the out-of-the-box transportation idea that is a new Bremerton to Bainbridge foot ferry made its public debut as the final item on the 5/10/22 Bainbridge City Council agenda (as a request to approve a more formal council discussion at a later date).

The concept of a new Bremerton to Bainbridge foot ferry route has been the subject of multiple shared meetings and discussions between the Bainbridge Island Chamber of Commerce’s Economic Development Committee, Kitsap Transit, and OfficeXpats co-owner and Councilmember Leslie Schneider. The Chamber’s interest comes from a desire to increase the size and quality of life of the Island’s workforce, and the ferry project is viewed as a potential complement to simultaneous efforts to support new construction in Winslow and improve housing diversity for all.

Within those discussions Kitsap Transit expressed optimistic interest, and revealed that a Bremerton to Bainbridge foot ferry was already one of the options being considered in KT’s new Long-Range Transit Plan, a plan which has already been gathering public input since Spring 2021 (and which you can provide your own input into right now – see the end of this article for more details).

In part, Kitsap Transit’s interest is founded in the most recent rounds of statistics available from the U.S. Census Bureau:

Initial discussions were then begun with the Chamber and our partner organizations on Bainbridge (employers, environmental groups, cultural institutions, disaster preparation leaders, city hall and more), as well as with our contemporaries in Bremerton and Port Orchard (and their business, city council, and chamber of commerce leaders). Those discussions have brought more potential benefits to light, and fueled interest in considering advancing the project towards formal feasibility and viability discussions and reports.

We stand today at the beginning of what has the potential to be a long journey towards moving what is now little more than a dream into an everyday reality, and in that light, the Chamber would like to take a moment to summarize and present those possible benefits as conversation starters and thought provokers…

20 Potential Benefits of a Bremerton to Bainbridge Foot Ferry:

1. Time: Proposed BRB foot ferry would utilize a route with the potential to reduce current road-based travel time by 50% to 75%.

2. Money: Kitsap Transit proposes BRB fare should be the same as taking the bus and in line with their existing ferry routes at $2 each way (which would make a round-trip ferry ride cost less than 1 gallon of gas for your car)

3. Existing Facilities: Kitsap Transit’s existing boats already dock at BOTH passenger-only and auto/passenger ferry docks, so the existing facility locations can be used for the BRB route.

4. Existing Route: More than 85% of the BRB route could utilize parts of the existing Seattle-Bainbridge and Seattle-Bremerton ferry routes and the multiple feasibility and impact studies already conducted over the past 20 years.

5. Existing Boats: No new boats need to be purchased to begin a BRB pilot program (as it is possible to lease a current backup boat) – and as few as one additional boat may be required to operate the BRB route on a permanent basis.

7. New Work Patterns: Since 2019, Kitsap Transit has seen the greatest decline in ridership on routes used by workers who live in Kitsap and work in Seattle (in line with the pandemic-accelerated shift to working remotely and/or locally).

8. Workforce: Making it cheaper and quicker to commute between Bainbridge/Bremerton, makes it easier for employers to find workers from across the county, and gives essential workers (teachers, first responders) and workers in general improved quality of life when living in one community and working in another.

9. Traffic Reduction: The BRB ferry creates quicker, cheaper way for commuters and leisure passengers to travel between Central/South Kitsap and Bainbridge – thus reducing car and bus trips on routes to/from the Island (especially at the chokepoint that is the 2-lane Agate Pass Bridge) and improving journey times for other road users.

10. Supporting Sustainable Multi-Modal Hubs: Downtown residents/workers on both ends of a Bremerton/Bainbridge route will be able to complete their commute by boat and foot only. All other riders will increase demand for BI Ride/Kitsap Ride on-demand buses, bikes, and scooters to solve ‘final mile’ challenges and reach destinations beyond downtown, and increase the benefit of building the facilities (charging stations, rental centers etc) to service that demand.

11. Environmental Impact: Transporting hundreds of people per sailing on a route less than half the distance of driving by bus/car, is projected to result in measurable emissions reductions via increased usage of more sustainable public transit.

12. Financial Sustainability: Operational costs of Kitsap Transit’s existing foot ferry costs can be as low as $1800/hr, but with county sales tax, state/federal subsidies etc. taken into consideration, this requires only $400/hr in fares (200 passengers/hour at $2 per trip) to break even.

13. Cultural I: Enables low-cost connection from Central and South Kitsap (where majority of the county’s residents live) to Bainbridge institutions (like BIMA, BPA, KiDiMu, Historical Museum, Bloedel, Grand Forest, Fort Ward, Blakely Harbor) with a mission to serve all of Kitsap County.

14. Cultural II: BRB ferry will connect Central/South Kitsap with the numerous additional public and private businesses and organizations in the new state-certified Bainbridge Creative District (11th in the state, first in Kitsap County).

15. Cultural III: The Admiral Theater, Roxy Theater, and the emerging entertainment district around the Bremerton ferry terminal will become more of a viable recreational alternative for anyone standing at the Bainbridge ferry dock.

16. County-wide Visitor Trips: Intra-county ferry travel supports new swift, simple, and inexpensive multi-stop Kitsap travel itineraries that do not require the use of a car.

17. Disaster Resilience: Creating a local, in-county ferry service with at least one dedicated vessel will be a significant lifeline for Bainbridge Island’s connection with the world in the event of a natural or man-made disaster that closes the Agate Pass bridge.

18. Social Equity: The BRB ferry route could directly connect the opportunities of one of Kitsap County’s highest-ranked median income (#2 of 26) communities with four of the lowest ranked (#13, 14, 22, and 24), as well as creating an environment that could foster investment capital flowing more easily across Kitsap.

19. Consistent with Next Phase of KT’s Long-Range Transit Plan: After recently completing the planned foot ferry link between Kingston, Bremerton, and Southworth into Seattle’s Coleman Dock, Kitsap Transit can now pivot to exploring community interest in intra-county connection. The BRB Project aims to place the Bremerton-Bainbridge route at the top of this already-underway study list.

20. County vs City aka – ‘what about a foot ferry from, Bainbridge to Seattle instead?’: There are already 23 WSDOT Bainbridge/Seattle boats in each direction each day, and those existing sailings rarely run at full passenger capacity. Also, in this (hopefully) post-pandemic era, there are declining numbers of Kitsap-based commuters working in the City each day, and increasing numbers of workers commuting within the County.

NOTE: It should be noted that all the potential benefits and supporting reasons listed above are very, very much preliminary and subject to subsequent feasibility research, private discussion, public input, and an extensive array of additional testing.

Have Your Voice Heard by Kitsap Transit:

Since the spring of 2021, Kitsap Transit has been working to formulate a new Long-Range Transit Plan, a planning tool that can guide their operations over a prolonged 20-year timeframe. Over the past few days, every resident of the County should have received a postcard in the mail inviting their involvement and asking for input in the Kitsap Transit Long-Range Transit Plan Survey.

If you are in favor of this Bremerton to Bainbridge foot ferry concept  please head there now a choose ‘New Ferry Route(s)’ as your top priority for that long-range plan – and also please ask for ‘consideration of a new Bremerton to Bainbridge foot ferry route’ within the final, open-ended call for comment (which is the final part of the 5-minute survey).

If you have any other ideas to improve public transportation in Kitsap, that same call for comment in the survey would be a great place to share them directly with Kitsap Transit.

Have Your Voice Heard By The Chamber:

At this point in the project, the Chamber welcomes any thoughts, comments, or suggestions that local business owners, community leaders, and residents might have to share. Please let us know through the contact page here on the Chamber website, or simply drop by our offices at 395 Winslow Way E.

More from the Kitsap Sun:

“A ferry route linking Bremerton and Bainbridge Island? There’s a conversation to be had”

Online Data Sources for further deep dives into this idea: